The Pelagie Islands, the "Deep Sea Islands", as he called the greek historian Herodotus, are the southernmost islands of Italy ,ifa strictly administrative point the Pelagie belong to the province of Agrigento, looking at a map one can become aware how these islands are closer to the North African coast than to Sicily itself. Indeed Lampedusa is 120 miles from Porto Empedocle, while only 60 miles from the Tunisian coast.

E 'consists of two major islands of Lampedusa, Linosa and the rock of Lampione. Islands are very different from each other. Lampedusa - closer to Tunisia than to the coast of Sicily - and the rock of the lamp, are part of the African continental platform. Linosa is instead the visible tip of an extinct volcano. The most famous is definitely Lampedusa, surrounded by a spectacular sea of incredible hues ranging from transparent, turquoise, emerald green, to blue. Today Lampedusa and Linosa are an essential point of reference for lovers of the sea. The crystal clear water of the Pelagie changing colors in shades that go from green to turquoise, all 'blue, to dark blue, it is the preferred environment for all fishing enthusiasts.

The encounters with colorful marine life in polychrome pristine habitats of the Mediterranean seabed, beaches with golden sand, coves created in the rock over the centuries dall'infrangersi of the waves, the wild beauty of the earth, have made them famous sites making them indispensable places for a memorable vacation.

To reach the Pelagie and choose to stay in Lampedusa or Linosa you can get to your destination by sea or through the frequentii air links. If you are traveling with your own transportation, you need to get to Porto Empedocle, the old wharf of Agrigento which is just seven kilometers from the capital.From here you can board the ferry that connects daily, unless bad weather or rest day, the coast of Agrigento with the Pelagie. It starts at 24.00 hours to reach the port of Linosa at around 7.00 am.After a break of about 40 minutes needed to complete the unloading, it will continue the navigation, arriving in Lampedusa at around 8.30 hours.

For the return instead the departure is scheduled from Lampedusa every morning at 10:30 with arrival in Porto Empedocle around 18:00.From July to September, the connection between the Pelagie and Sicily is also ensured by fast hydrofoils that, always starting from Porto Empedocle, covering the route of 120 miles in under four hours.

To explore the island and visit all the coves and beaches which can be reached by land, it is essential to have your own transport, so if you have not come by car or motorbike, we recommend renting the place half transportation that allows freedom of movement. To learn more about Lampedusa can start from the village, the center of gravity of the whole island. After leaving the port area, a few hundred meters away is the center of the city is Via Roma. This sufficiently wide and long street there are bars, pubs and shops where you can do shopping of all kinds. Key reference point for tourists not far from the central area of the municipality with the clock tower and the church. In the central Freedom Square you can admire the obelisk by Arnaldo Pomodoro and dedicated to the fallen in the struggle for just causes.

Leaving the city center and the port area, where there are few facilities for processing fish, walk into and along the street lined with low houses, a building is in tuff blocks composed of large rooms a bit shattered. These are the last witnesses of the penal colony established by the Italian government in 1872. Along the Strada di Ponente 12 km long and why all Lampedusa is crossed, you get to the tip of the island, Western Cape where within walking distance you can take a trip on the mountain sun tree with a height of 133 meters  above sea level, it is the highest point of Lampedusa.

Cala Salina, at the foot of the castle, you can see the remains of the baths manufactured by the Romans for its production of "garum". A little more than two kilometers from the city, immersed in a green oasis is the Sanctuary of the Virgin of Porto Salvo protector of Lampedusa, where through a small road you can get to a small beach. During the tour you can see some "dammusi", typical buildings of Arabic origin, widely used in Pantelleria and Lampedusa imported by early settlers of Pantelleria. After a detour will reach a plateau where a splendid view of the Island Conejos. Uno of the strengths of Lampedusa is certainly capture the crystal clear sea, the opportunity to take a dip because of the many coves along the coast or lie on the shore of the warm beaches of the island, which gives even more eager to come to this Mediterranean pearl.

Among the coves of easy access to swim between the rocks you can choose between Punta Sottile, Cala Calandra, also called the Dead Sea or Cala Creta. If you prefer to relax in a warm golden beach you can go to Cala Croce, the beach of Guitgia, known for white sand color, or the most famous beach, the island of rabbits. Known for being the place chosen by the sea turtle Caretta caretta to lay eggs, the beach and the island are the marine reserve protecting this species in sharp decline of the specimens. This is the most suggestive part of the island and seen from above one by the clear emerald sea and water clarity is surprised. The name comes from the fact that once the island was densely populated by rabbits.

Linosa, beautiful, black lava rock, stands the profile of its three mountains against deep blue sky. The only town is gathered around the harbor of the Old Port, and is characterized by nice buildings arranged in a row next to each other, painted along the edges, the doors and windows, in very bright colors like yellow, red, blue , blue green. Glancing a little 'more than we realize how everything, from the color of the houses in the green of the crops, the blue sea, contrasting with the black volcanic rock. It 'a card that excites and makes us understand the size, the environment, the atmosphere of the place. If you'll just have to ask to get information on where to stay or other indications in general, then you will find the immediate availability and promptness of linosani to solve all your needs. If the Sicilian hospitality is a sacred and essential element for linosani is even more Here the tourist is treated not as a guest but as a family, a relative came from far away that you can offer all the hospitality.

Those who choose to spend a holiday in Linosa plunged into a completely different reality from the chaotic resorts where, sometimes, maybe it's easier getting stressed than relaxing. Where the beaches are real mass graves and waterfront like noisy exhibitions of cars and motorcycles. Here there is none of this. A Linosa, from June to September, non-residents are not allowed to disembark car and the only means that tourists can bring the island are bikes and motorcycles. Therefore before boarding recommend leaving the car in Porto Empedocle in one of the many parking lots kept close to the port. Motorcyclists remember that in Linosa there are no service stations before leaving so it is essential to fill up on fuel. However, if you choose to arrive without half in tow, to get around the island you'll be fine. To achieve your goals you can rent a scooter on the spot, or accompany you on board some tractor with attached trailer, or a more comfortable motoape. The diversion is insured, and the driver will be your guide.

The heart of the island is the area of ​​the ferry dock.
The two main streets where there are also a few shops on the island and the post office, are the way King Umberto and Via Alfieri. The first runs from the old airport until you reach the home of the municipal representation. Hence the second stretches to the inner area of ​​the island in the direction of Monte Vulcano. Which is essential for the island's economy is tourism which today is mostly supported by their own revenues come through the flow of tourists, although there are other sources of income from agriculture and fishing.

Linosa is a magical land to be discovered. The excursions into the interior will reveal the secrets of this land, around the island by boat will give you the vision of the sea coves that adorn the coast of a wild beauty.

To go around the island on foot s'impiegano a couple of hours and it is useful to remember to bring a bottle of fresh water out of the country because there are dining in the summer and put a sunscreen because the sun can become particularly bitter. Wear a hat, the most comfortable shoes you have, (preferably hiking and still with rubber soles) and go to the conquest of the island. You can start the hike along the trails leading to the summit of the three main volcanic peaks of the island. The most classic of walks is the one to Monte Vulcano (195 m) very tip of an extinct volcano whose summit you can enjoy the magnificent view of much of the island and in the days of Libeccio, you get even see Lampedusa.

There is also the Monte Rosso (186 m.), On top of which is a lookout post and the inside of its crater is covered with crops. The Monte Nero (107 meters), is the least of the three high. It is reached by a path a bit 'rough. Not far you can also see the craterlet or Vulcanello high 50 mt. and with a diameter of 70 meters. It is the youngest crater of Linosa. Moving towards the inner part and the central island, an area particularly well-protected from the wind, you reach the so-called Pit Chaplain, who is none other than the oldest crater island. Going back towards the sea you reach the place called the Faraglioni, this place particularly attractive. Along the way you can see the cisterns to collect rainwater built by the Romans. Continuing on past the lighthouse, you reach Cala Mannarazza and the Caves area. These are the large natural caves that were the homes of the early settlers when they landed on the island and which were used as shelter during the Second World War. Going back you can reach  Cala Pozzolana di Ponente, with the unique black beach and where the turtles "Caretta caretta" come to lay their eggs. A simple immersion in this place by the feeling of bathing as in a huge aquarium from the transparent and full of all kinds of marine life. Going a bit 'more down underwater, at 12 mt. you can see a statue of the Madonna col Bambino with protecting the sub. Cala Pozzolan indentation in the center is quite short. 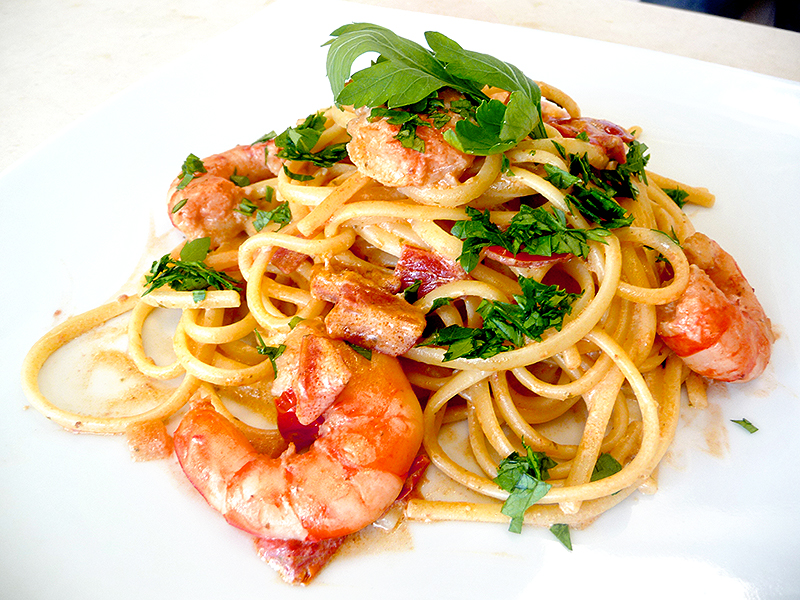 Gastronomy and typical dishes of the Pelagie Islands - 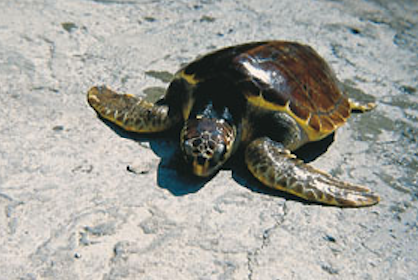 The Fauna of Pelagie

How to get to the Pelagie Islands